So the owl guru and I were at Coyote Hills, with me gawking at the burrowing owl and she further out looking for some elusive shorebird, and bizarrely, a flamingo, just outside of shouting range of each other, when I suddenly looked up, away from the owl on the ground, and into the sky, JUST IN TIME TO SEE A BALD EAGLE FLYING OVER MY HEAD. Now, this REALLY deserves capital letters because I HAVE BEEN TRYING TO SEE A BALD EAGLE IN CALIFORNIA SINCE I LANDED HERE. I used to see them all the time in Virginia and miss them terribly. They are just not as common here, although they are making a comeback in the Bay Area. I have only seen one other one the whole time I’ve been here and I kind of consider it cheating because it was the one nesting in the schoolyard in Milipitas that was constantly in the news for a while early this year (because what in the world was it thinking??). So this was my first and only “ad hoc” eagle and man, was I happy! Unfortunately I had the big lens on at the time, and on the tripod, trained on the owl, so I had to struggle to get the eagle in the frame in time and I guess I didn’t have enough time to focus, although honestly it looked in focus through the lens so I don’t know why these didn’t turn out. Nonetheless, I am posting them despite their being terrible photos because IT IS A BALD EAGLE!!!

The owl guru and I started flailing our arms at each other, hoping we each saw it, and when we reunited I told her I was DAMN glad I looked up when I did because if she had trotted back up to me and asked me if I saw the bald eagle and I HADN’T, I would have been furious with myself! I really probably have the ravens to thank – two of them were harassing the eagle, as you can see in the second two photos and their noisiness is probably what made me look up. Ravens and crows can be kind of useful in that regard; they are always harassing raptors, even when they are totally outsized. 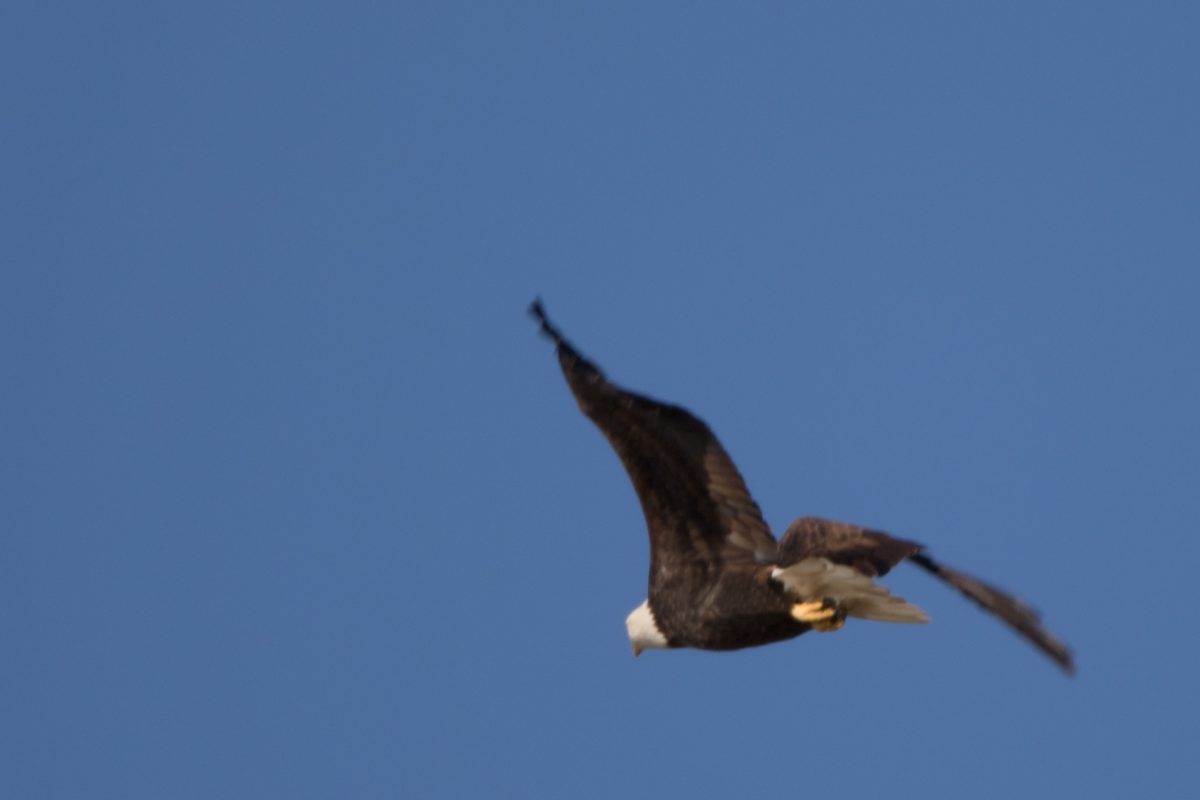 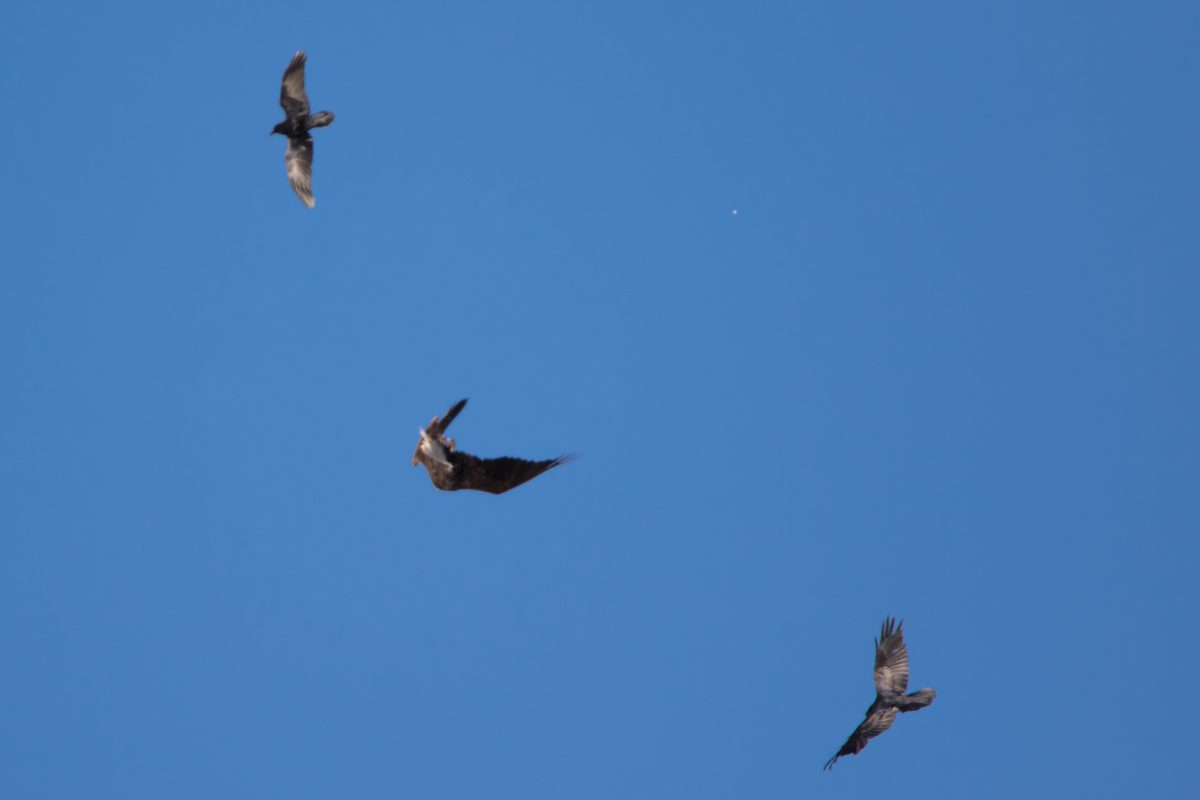 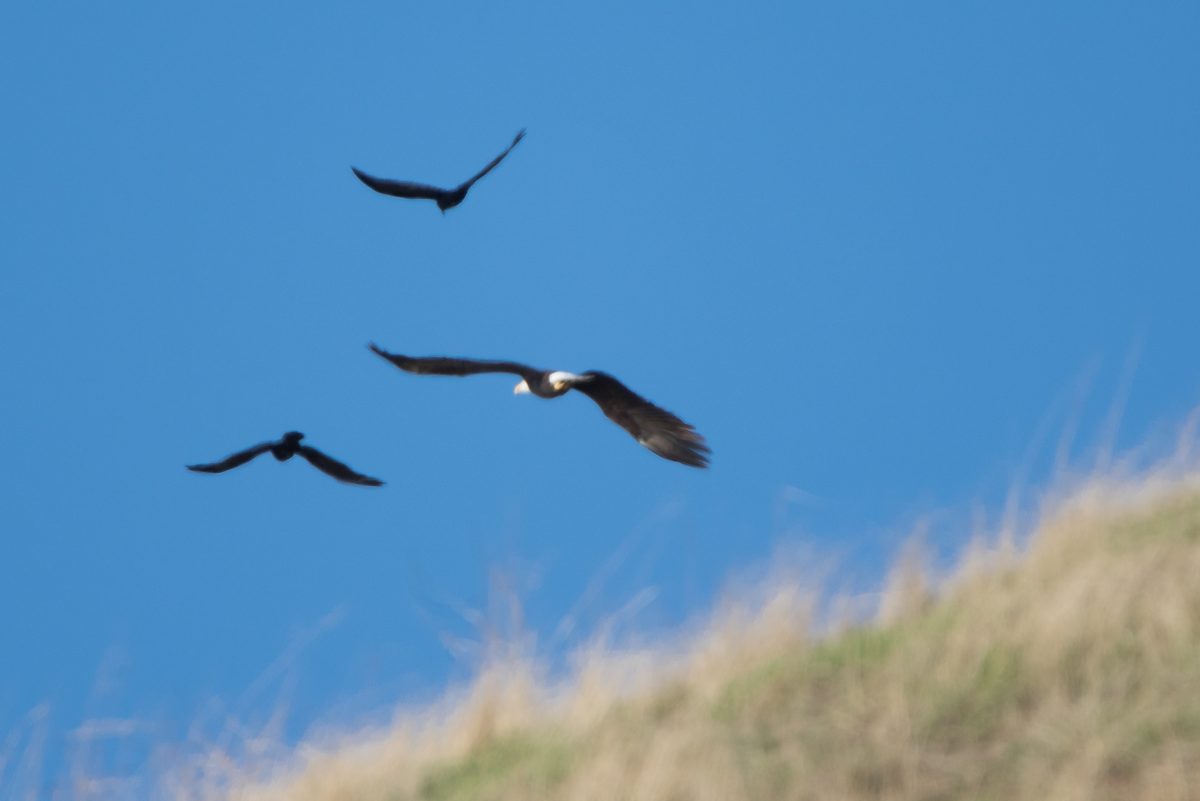