EDIT: I FEEL LIKE THE OWL GURU SHOULD HAVE TOLD ME A LONG TIME AGO I’VE BEEN SPELLING STELLER’S JAY WRONG. I just randomly read something in my Twitter feed about Steller’s jays, which I’ve been spelling “Stellar’s”. I am an idiot. Follows is the original post with spelling corrections.

There are two types of birds that people in the Bay Area erroneously call “blue jays”: California scrub jays (previously known as Western scrub jays) and Steller’s jays. Although both are jays and they are blue, blue jay is an actual species found on the East Coast and middle of the country, and as someone who grew up with blue jays, I always want to correct people out here.

Scrub jays are common and you’ll find them in your yards, at your feeders, and really anywhere you go. Steller’s jays, on the other hand, while common, don’t seem to be “yard birds” as much. In fact I was all excited to see a wild one at Sulphur Creek, which is small park, because they aren’t very common there. Jays rate very high – maybe the highest – on the “ease of feeding” scale I use to rate birds, and I am fond of them, although it’s hard to get excited about seeing scrub jays because they are ubiquitous. Steller’s jays are more exciting to me because I see them less often, and also because Sulphur Creek has an education Steller’s who is a human imprint and he’s THE BEST. He’s hilarious and I love him, so I tend to love all Steller’s.

One day a few weeks ago I looked out my window and could have sworn I saw a Steller’s jay flying through my yard, but he darted out of sight and I wasn’t entirely sure. A few days later I happened to glance outside while working and DEFINITELY saw a Steller’s, so I ran to get my camera, and by then he had actually landed on my fence and was posing for me! Just outside of the frame of this picture, by the way, a scrub jay was also sitting on the fence. I should have gotten a picture that fit both of them. Unfortunately I haven’t seen the Steller’s since then, but he might be around. I hope so. 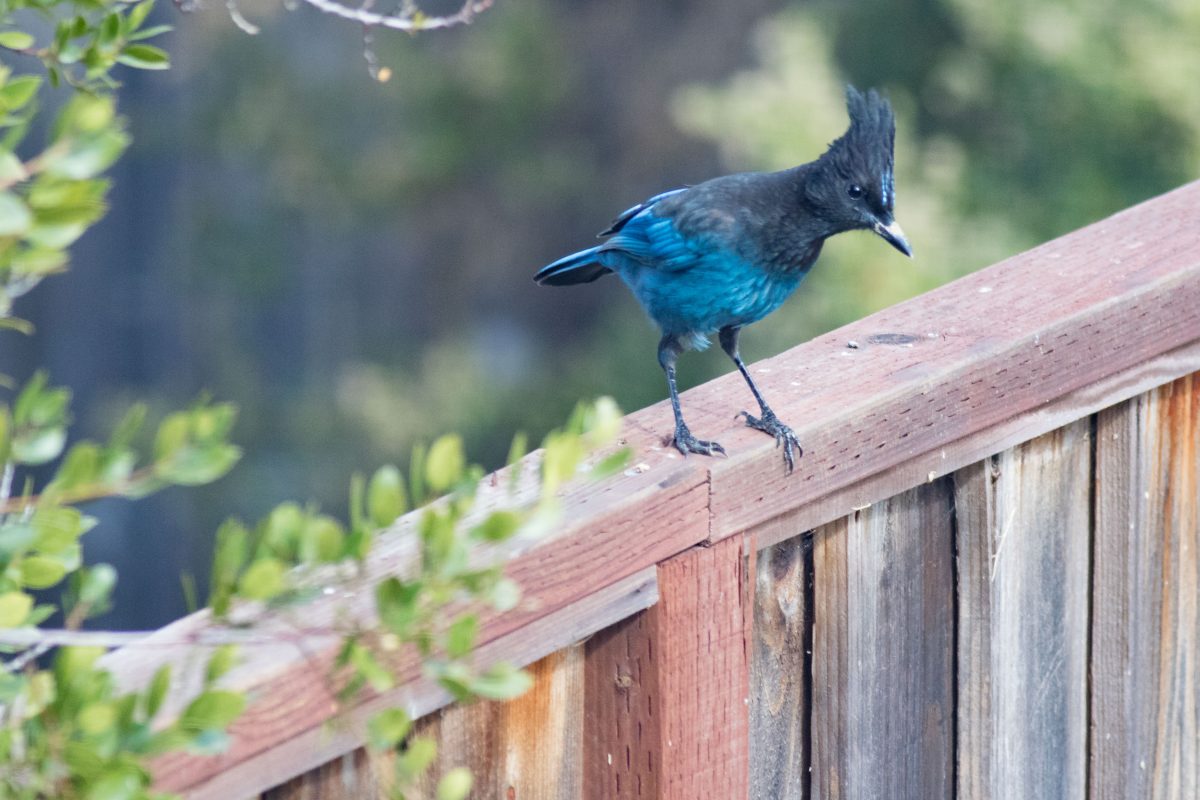